The history of bolts and nuts goes back a long time: evidence of the use of primitive bolts can be traced back to the Roman era. The threaded bolt was first used in the 15th century, but it was during the Industrial Revolution in the 18th century that the bolted joint became commonly used in the engineering and construction world.

In the modern age, bolts are mainly used in tension joints or joints where preload is used to create friction. The friction is used to prevent the clamped components to shift. In both types of connections the homogeneousness between and pre-load in the bolts is important. 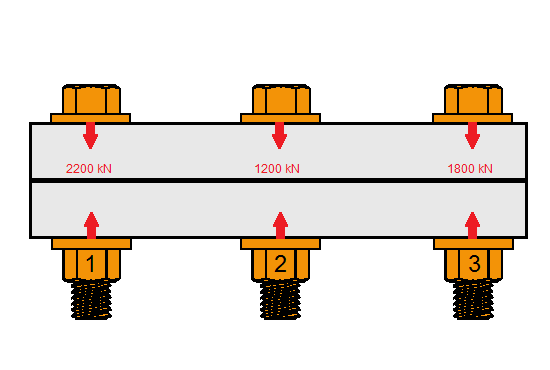 Figure 1: Section of a flange with difference in pre-load of the bolts. 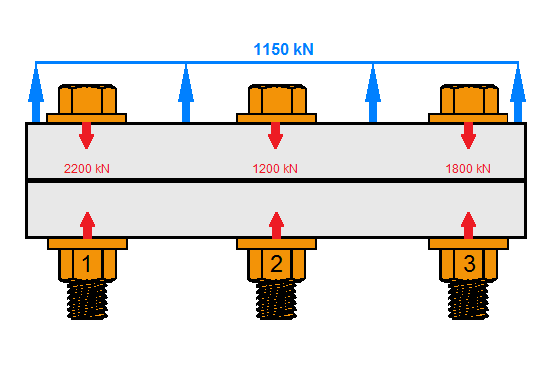 Figure 2: The external load (1150 kN) is below the pre-load of the bolts, no effect on the fatigue life of the bolts. 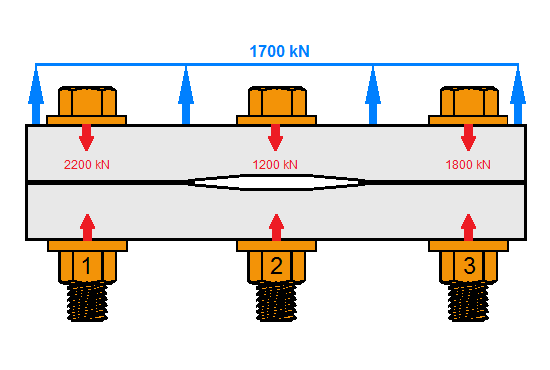 Figure 3: The external load (1700 kN) exceeds the pre-load of bolt 2 causing a stress cycle on all bolts in the connection. The biggest impact on the fatigue life is on bolt 2. 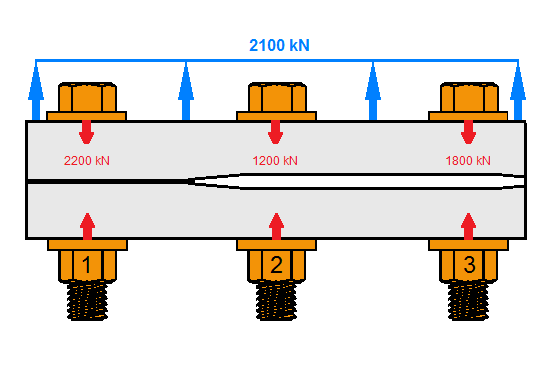 Most of the bolted connections are made using a torque wrench. Torque causes a rotation of the nut or bolt that, due to the geometrical shape, is transferred to a tensile force. During this transfer, about 90% of the torque is lost in an increasing resistance. The buildup of tensile load or pre-load, stops when the resistance is equal to the torque applied to the fastener. As the resistance differs between the bolts, there will be a difference in applied load using the same torque.


The current guidelines for steel on steel flanges are set up using the assumption that all fasteners; These are just a few of the factors that are not taken into consideration when determining the method and torque needed to pre-load the bolts in a flange.

The results of these tests were compared to the results of similar tests using a newly developed procedure for steel-on-steel bolted flanges.

The results were astonishing. The aforementioned assumptions have a large effect on the applied and remaining pre-load in the bolts. The effect under workshop conditions showed most bolts below the minimal required preload combined with a substantial scatter.
The offshore conditions showed an even worse picture with values as low as 30% of the minimal required pre-load, which was expected with the used torque, combined with a large scatter. 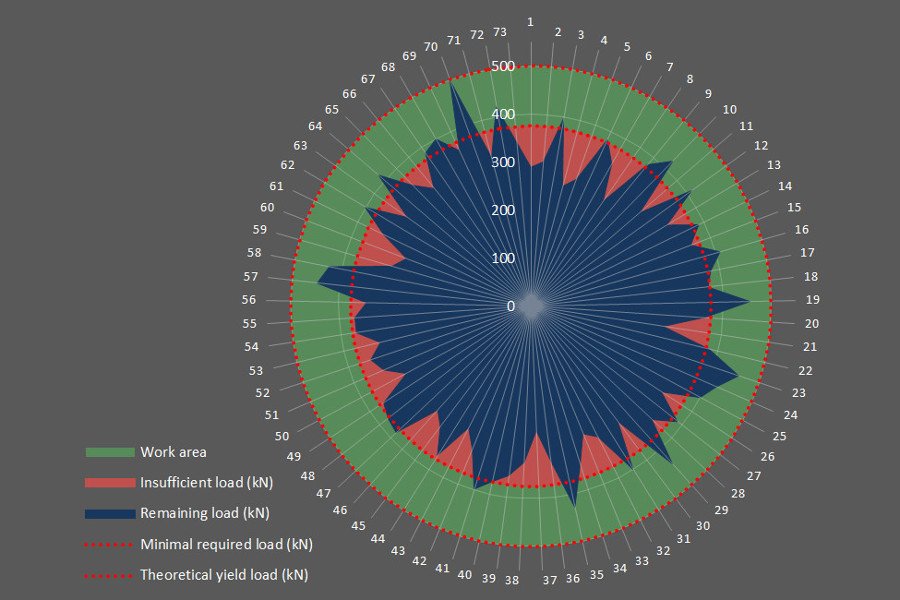 Figure 5: This picture shows the result from a test in a controlled workshop environment using traditional torque methods. The amount of applied torque was determined by taking the average of torque needed to reach 380kN on 5 bolts. 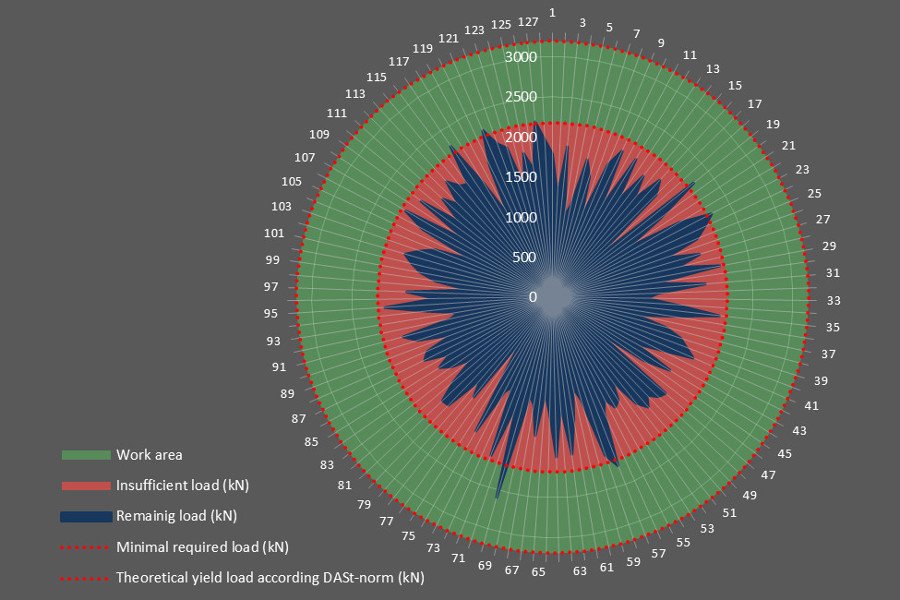 Figure 6: This picture shows the results from an offshore flange that was closed using traditional methods. The amount of applied torque was determined by testing pre-lubricated bolts on a torque tension machine in a laboratory environment.

Because of the large insecurity and lack of traceability in bolted connections BoltLife developed a new, revolutionary procedure for closing critical steel on steel flanges. This procedure provides accuracy and traceability to a critical bolted connection. The results of the procedure developed by BoltLife show a consistent pre-load with all bolts above the minimum level and a scatter less than 10%. The results of the use of this procedure in an offshore situation were like the results of the workshop test. The bolts were all pre-loaded above the minimal required level with a scatter of less than 10%. 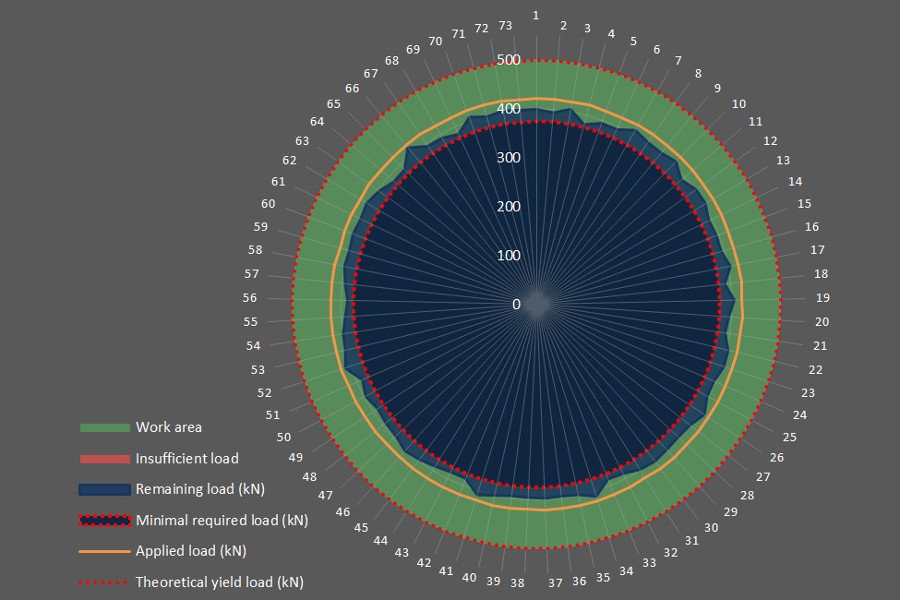 Figure 7: This picture shows the result of a similar test as in figure 5 except in this case the BoltLife procedure was used. The applied load was determined by the ultrasonic measurements on each bolt individually. As all bolts were only tightened once, the time used to close this flange was less than with traditional methods. 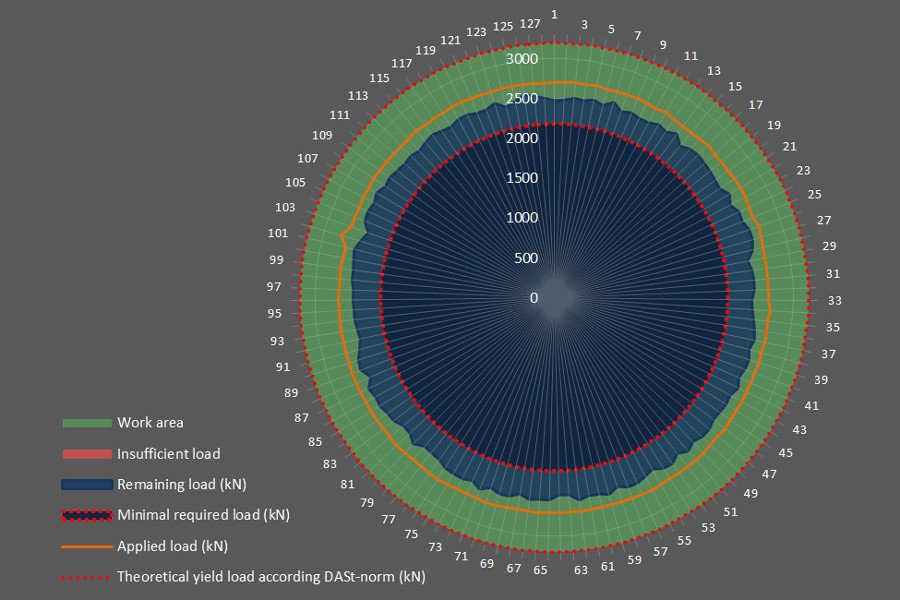 Figure 8: This picture shows a flange closed in an offshore situation similar as in figure 6. The procedure used to close this flange was the same as in figure 7. As can be seen the results did not get worse from the circumstances and all loads are well within the safe work area of the bolts.

All measurement set-ups for the Checkline MAX II ultrasonic measurement device are made in our laboratory using equipment especially designed for this purpose. All set-ups were made before, and verified after the procedures.

It is not possible to use standard ultrasonic bolt measurement settings, as larger bolts are made in a different way and from different materials than the standard, smaller bolts. We have even found considerable differences between the batches in a single project produced by the same manufacturer.

The guidelines for these larger bolts are an extrapolation of the guidelines for smaller bolts. In general, all bolts larger than M36 or equivalent have a larger variety in characteristic behavior.

With this new procedure BoltLife shows that there is a lot to gain in the quality and durability of bolted connections. Having all bolts measured during the tightening process not only creates an accurate pre-load, but also provides the opportunity to periodically re-measure the bolts in the flange in actual load.

All in all, we distinguish from others in this industry through our revolutionary preload method. The achieved high and consistent preload with this system results in an exponential increase of the lifetime of your bolted connections and a decrease of the need for periodic check-ups. The accurate measurement values result in efficient bolt maintenance programs. This will lead to high cost savings at both installation and maintenance of the bolted connections while guaranteeing a high quality and certainty increase.

Are you interested in further information on our services? Feel free to contact us. We look forward to working with you!